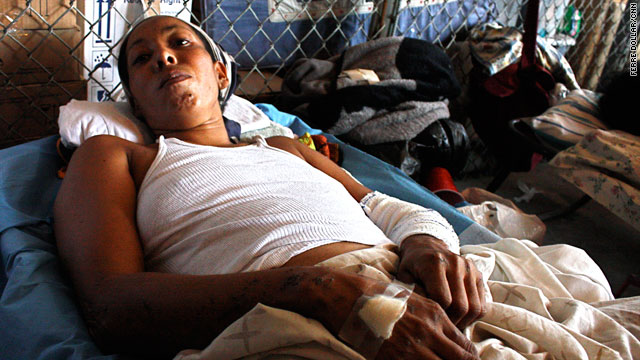 Port-au-Prince, Haiti (CNN) -- On Wednesday Jan. 20, 2010,
Dr. Toni Eyssallenne was walking the aisle of a small makeshift hospital
in Haiti run by the University of Miami when a patient beckoned to her.
"I assumed she was in pain, so I walked over and asked her what was wrong,"
Eyssallenne told me. "
But she said she wasn't in pain.
She said she just wanted to tell me what happened to her.
For the next thirty minutes, I listened to her story."
This is Sonia Flury's story, translated by Camala Jourdain,
a Miami nurse working in Haiti under the auspices of the
Haitian American Nurses Association.
My name is Sonia Flury, and I'm 40 years old, and I live in the Canape Verte

section of Port-au-Prince with my 20-year-old daughter, Pascale Delmas.

when we felt the house started to shake.

We felt the house cave in and all the furniture fell down around us.

We yelled "Help me, help me," and then we heard cries from the people

on the upper floors crying out for help, too.

Three stories fell on top of us.

Then we felt the roof fall in.

have a dresser that has three tiers, and the dresser caught the roof.

Neither one of us could move; My daughter said, "I need to get out so I

can get a drink.

After everything fell on top of us, I was lying on the bed on my back,

and my daughter fell into a hole next to the bed,

with only her head above the rubble.

She was by my left shoulder, and I put my arm around her head and cradled it.

Neither one of us could move; we were surrounded on all sides by concrete,

and crammed in by the concrete walls.

My daughter said, "I need to get out so I can drink. I'm thirsty."

I consoled my daughter, and we started singing.

We sang, "Keep me, keep me, God of love, give me a safe place to stay

Let me find a place to hide behind you, and I know you will never leave me."

I told God, "If it is your will for me to die, send your angels to come get me,

and receive me into your kingdom, but if your will is for me to stay alive,

keep me alive so I can testify to the miracles you've performed in my life."

a spiritual life for him.

My daughter was thirsty, so I urinated and put it in my hand since I didn't have a cup,

and I gave it to my daughter to drink.

God let me use my urine to appease her thirst.

I didn't eat or drink for five days, but still I urinated every day.

I was never thirsty and never hungry.

On the third day, my daughter became suicidal.

I had a mirror above my bed, and it broke, so there were pieces

of glass around us.

My daughter grabbed the glass and tried to cut her neck and cut her belly,

and cut her side.

Then she cut her bra off and tried to use it to choke herself.

I stopped her, and my daughter told me, "You are selfish.

You see I'm suffering and you don't want me to take myself out of my misery."

I told my daughter she couldn't kill herself if God wanted her to be kept alive,

My daughter stopped and asked God for forgiveness.

On the fourth day, I told my daughter, "Don't worry, somebody will come for us."

That day, we heard voices, people talking outside saying they were coming

to bring the corpses out.

I was screaming and screaming, and one of the people who came for the corpses

heard me, but someone else in his group said it was too dangerous to break

the walls to get me, so they left.

My daughter was saying, "God, what have you done?

You sent us rescuers and they don't want to help us."

And I responded to my daughter, "God will rescue us. Don't worry

- someone will come tomorrow."

My daughter confessed all her sins to God, and so did I.

We slept that night, and in the morning, we heard noises in the top part

Then there was an aftershock, and so the neighbors left.

On the fourth night, my daughter had diarrhea and a fever.

I tried my best to cool her down.

and put it on her head as a cold compress for her fever.

so I wasn't able to do anything for you as a daughter, but take courage,

you still have my brother."

She said, "God take me during the night."

Then she had a seizure and started to bite me.

My daughter died that fourth night.

On the fifth day, one of our neighbors saw my son and told him,

"Your mom is alive. We heard her talking."

to come help us.

The first team of rescuers couldn't get us out with the tools they had.

Then a fourth team started breaking the wall.

They made a hole and put a camera through and said, "Do you see us?"

because the walls would come down on top of us, so instead they made

a hole from the bottom.

The rescuer came from the bottom and touched my toes.

They told me to move inch by inch, little by little.

They slid a board under me and chipped away at the wall, and I slid down.

I was holding my daughter's head, and when I slid down,

I let go and said goodbye to my daughter.

I said, "I'm sorry I'm leaving. We had a great time for four days.

We were able to talk every day, and now I have to leave you."

When they got me out, I was about to pass out, but they said,

The rescuer hugged me, even though I smelled and was covered with urine.

He gave me a bottle of water that I still have with me now.

Everyone was surrounding me and shouting, "Victory! Victory!"

My neighbors were there, and they were saying, "I was praying for you.

I was praying for you."

They put me in the bed and gave me saline.

All the neighborhood wanted to touch me to make sure I was still alive.

Everyone wanted to see that it was true, because they couldn't believe

I came out alive.

I was never scared. I knew that if I was afraid, I would die, because if

I became stressed, then my heart would start beating more,

and I didn't want that to happen.

I said, "Don't say that. If God wants you to live, he'll let you live,

and if He wants to take you, He will do it in his own time."

Please keep me in your prayers. I don't know where I go because my house

I know God will help me.

Flury survived with wounds to her buttocks and torso.

She lies comfortably on her back, although she cannot turn over due to pain

so they can make sure she doesn't have any internal damage.

phone bill with your donation going to the Red Cross.
Email Post