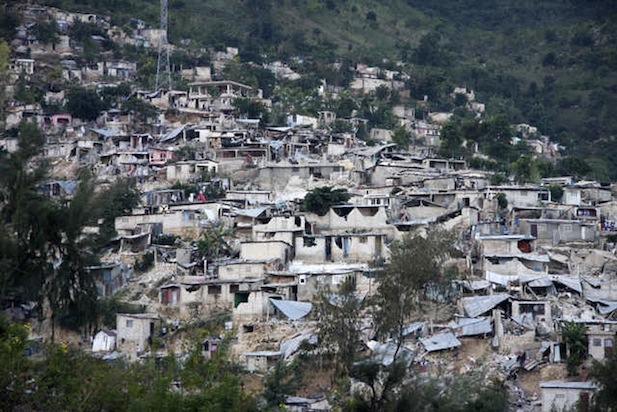 One of the most conspicuous responses was Friday night's charity telethon,

"Hope For Haiti Now: A Global Benefit For Earthquake Relief."

behind a single cause.

There were more than 100 actors and musicians answering phones in Los Angeles,

They took calls after the operators took one's donations.

in many many years.

The production and broadcast idea of  George Clooney and WyClef Jean

with collaboration from MTV Networks.

As donations continue to pour in from around the world,

Saturday January 23rd that it has raised more than $58 million.

A new record for donations made by the general public through

I especially enjoyed the different renditions of some of my old favorites...

like Shakira's musical message of compassion and unconditional love as she

after Sept. 11th (but that's another story left for different day).

This song was written more than 150 years ago by the "father of American music,"

I was captivated by Bruce Springsteens take on "We shall overcome,"

and his choice of instrumentation with a guitar, an accordion,

by Charles Tindley a minister from Maryland. Springsteen's raspy vocals

pierced deep as he sang, "We are not afraid today. Deep in my heart,

I do believe, we are not afraid today."

One of my favorite performances came by the unexpected trio of Sheryl Crow,

Keith Urban and Kid Rock as they sang "Lean on Me."

and remained a number one hit for 19 consecutive weeks.

I loved the way they took this R & B song and gave it a county feel.

in iTunes history and is currently the #1 iTunes album in 18 countries.

But what a truly spectacular and entertainling live concert it was; with performances

from Bono, Dave Matthews, Neil Young, Sting (who I saw live in a small

underground club in Tyrol Austria back in 1983)... as well as performances by Alicia Keys,

Emeline Michaels, and Taylor Swift to name a few others.

I have no doubt that if we work together, we can help lighten the load that our

Haitian brothers and sisters have carried on their own for over two hundred years.

We can finally give them a real chance for a better tomorrow.

Each of us has a stake in Haiti's future.

Although our lives couldn’t be more different, we are a people on this

is linked with ours.

They need and deserve a stronger, more secure Haiti, which in turn means a stronger,

more independent and secure region. They deserve the chance to build a nation

that will reflect their personal drive, determination, beauty as a people,

means, "Many hands lighten the load."

Go to HOPEforHAITInow.org or text GIVE to 50555 or you can also text

with your donation going to the Red Cross.
Email Post