Not just a Mexican problem... it never was 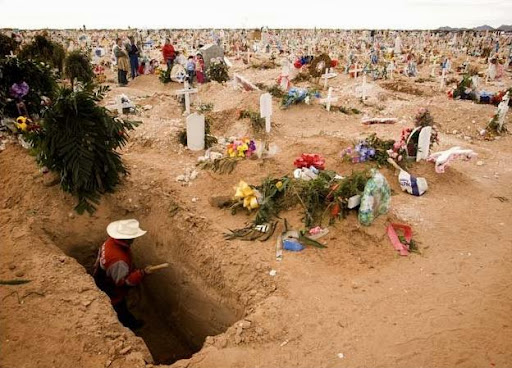 I was speaking to my niece Nydia last night, she lives down the road from the Cathedral of San Lorenzo in Cd. Juarez.

The pain in her voice and undeniable sense of fear has been a part of her daily life for over three years.

She now has a beautiful baby boy and wondered out loud if the world he is coming to will ever be a safe one.

But there are hundreds of thousands of families much like hers suffering the same conditions, the same fear and mourning loved ones.

Wlthough 44% of all businesses have closed and more then 380,000 of its citizens have fled, many thousands much like my niece, and relatives have decided to stay.

We are after all a people of faith.

Still it feels as though our prayers and pleadings have gone unanswered.

The drug cartels continue to bring human and economic devastation to Mexico and its people.

As of Tuesday evening the death toll in the border city of Cd. Juarez attributed to the cartels is over 8,500 people assassinated in just the past three years.

The nonprofit group Network for the Rights of Children in Mexico estimates 994 children and youths under 18 were killed between late 2006 and late 2010, and the number has risen since then.

While many wrongly believe that it solely a Mexican problem.

The truth is that 78% of assault weapons confiscated in the past two years in Mexico were bought and shipped into Mexico by US citizens.

A recent article in the Washington Post uncovered the fact that eight of the top twelve gun dealers were in Texas, three were in Arizona, and one was in California.

Some people also ignore the fact that 70% of the world's drugs are consumed and or transported through our country?

To give you some background Mexico President Felipe Calderon, launched a war on the drug cartels in late 2006.

He is now facing his toughest test in Cd Juarez, where 7,500 troops and 2500 elite Federal police have failed to end beheadings, car bombings, kidnappings, car jackings and extortions.

The drug war death toll across Mexico now stands at more than 38,000 since it began back on early December 2006.

The on going war is over transport/trafficking routes between the local cartel boss Vicente Carrillo and Joaquin "Shorty" Guzman, who heads the Sinaloa cartel.

This on going turf war continues to fuel violence, anarchy and a deep sense of hopelessness for the people of Ciudad Juarez despite the government's efforts.

The social economic dynamics of this city also contribute to the deepening catastrophe.

There are a lack of jobs, with the minimum wage of just $9.23 US dollars "A DAY" continues to cause unemployed and desperate people to take highly paid criminal enterprise jobs.

Youths joining gangs, with many unemployed men and woman are turning to the cartels for highly paid jobs, helping them promote and enforce business protection rackets, extortion, drug dealing, human smuggling, kidnapping and even beheadings.

Our own GAO (Government Accountability Office) has called for urgent action to stop cross-border currency smuggling after federal officials from Customs and Border Protection seized $41 million in cash in the past few months.

The actual dollar figure will astound you - according to a report, from the National Drug Intelligence Center criminals smuggle between $18 billion and $39 billion each year across our Southwest border into Mexico.

Because Customs and Border Protection does not have the manpower to conduct full-time inspections of south bound traffic only a small fraction of the illicit cash flow is being seized.

I was reading that the Mexican cartels have also gotten smarter and are also using smart card technology as a new way of creating new money laundering revenue streams.

One of the examples cited is stored value cards or pre-paid cards.

Where prepaid cards can be loaded with US currency that are then used to move illegal proceeds across the border and around the world.

To date there are no US laws in place that require border-crossers to declare the value of prepaid cards they may be transporting.

IPhones applications are another way.

Mobile phone banking and money applications are also being used with greater frequency to conduct money transactions which are just if not as difficult to detect.

The Mexican government has repeatedly complained that cash and weapons that flow south of the border continue to enable all seven drug cartels to conduct the violent battles that have killed over 38,000 people in Mexico.

Last June, Border officers conducting south bound operations at the port of entry in San Luis, Arizona seized a large sport utility vehicle, that was carrying 114 grenades and over 2,500 rounds of various types of ammunition.

Mexico needs our help and one way is to make improvements to our border infrastructure and upgrade our technological capabilities.

Doing so would make it possible for us to seize the billions of dollars currently being smuggled back into Mexico and thereby depriving drug traffickers of the proceeds that continue to finance their deadly operations.

Yes, Mexico indeed is confronting the most difficult war it has ever battled.

A lot of this doesn't get the air play it deserves as their situation can quickly flow over as it already appears o have done with drug arrests throughout the US and the numerous drug transport tunnels found between Mexico and Arizona and in California.

Politically Mexico is also facing its ability to govern.

In fact in 2010 seventeen mayors, all elected officials were assasinated throughout various cities and towns in Mexico.

The cartels intend to destroy each other and in doing so are destroying many innocent lives, destroying governance and the judicial system.

They are destroying the essence and hope of Mexico.

The Merida Plan, the United Nations, the U.S. military, DEA, and FBI and its Intelligence must become a part of their solution - a major part of the rescue strategy.

Mexico sadly has shown it can't go it alone.

They need us and WE must make sure that they are being heard.

Our Congressmen, Senators and our President need to hear that lives, including US lives have been lost and will continue to be lost in Mexico.

I know it would be much easier to turn a blind eye and not give this much more thought... but if we were in that desperate situation wouldn't we want someone to come to our aid?
Write or call your politicians.

I have, will you?