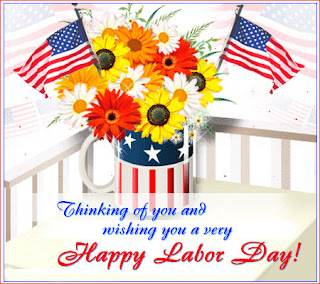 It's Labor Day and the first time all year that we awaken to 60 degree weather!!

Its a Monday and I've spent the weekend doing very little.

I've mowed, I've written and made a few calls and just done a lot of nothing.

This morning I'm sitting in my home office looking at my backyard,

watching the squirrels, blue jays, cardnals and finches arrive..
But what is Labor Day?
The first Labor Day was observed on September 5, 1882, by the
Central Labor Union of New York.
It didn't become a federal holiday till 1894, when President Grover Cleveland
reconciled with the labor unions following the deaths of a number of their
workers at the hands of the U.S. military and U.S. Marshals
during the Pullman Strike.
Fearing further conflict, Labor Day became a national holiday when a bill
was rushed through Congress, where it was unanimously signed into law
just six days after the end of the strike.
The first Labor Day celebration was a street parade to show the public
the strength and esprit de corps of the trade and labor organizations.
Soon after the parade the workers and their families held a festival
with food and music.
This became the pattern for future Labor Day celebrations.
The holiday is often regarded as a day of rest and parties.
Speeches or political demonstrations are more low-key than
May 1st Labor Day or Worker's Celebrations
in other countries like Mexico, Brazil, England etc..
Today celebration include picnics, barbecues, fireworks displays,
water sports, and public art events.
A lot of families with school-age children take it as the last chance
to travel before the end of summer recess.
But Labor Day doesn't seem like work today because I'd write my blog
even if no one read it.
I actually love what I do and would do it even if I didn't have to,
maybe even if I didn't get paid to do it.
Everyone needs to find something that they really enjoy doing,
and get out and do it.

If you are going to do something, than make
sure you enjoy it and is worth doing.
Did you now that 35% of all Americans now work sitting at their desks?
They/we may be working long hours, but "long" and "hard" are
two different things.
In the old days, we could measure our hard work by what we accomplished
in that one day.
How much grain we harvested, how many bushels of a certain crop
we brought home for example.
And though today we still push ourselves; working hard to succeed,
seeking job security, to improve ourselves financially, doing all we can for

our family's and planning for a future retirement.
We all have to work to make a difference.
We have to be a part of the solution.
We continue to read about unemployment and the possibility of another recession -
we have to do everything we can within our power to contribute more.
It's hard to accept that maybe we've been complacent, that we've
become a bit entitled.
That we are at times being physically, intellectually and emotionally lazy.
But unless we jump start ourselves, and make a difference where,
and when we can - then we might as well stand by and watch our companies,
our businesses, our country fade into a recession.
It's hard work to abandon something that we have been doing for a
long time in favor of a new and apparently risky alternative.
We have to be willing to take some calculated risks.
I am not talking about, taking an unsafe risk - but pushing ourselves
to not sticking with the status quo.
No one is out there accomplishing more by just working more
hours than you are.
They're succeeding by doing the hard work, putting in the extra effort.
Many of us are choosing to take the easy way out.
Quite often at the company's expense, more likely at your own.
Folks if you don't know it by know we're headed for a recession,
and the best opportunity that we've ever had to prove ourselves.
More hard work is about taking more responsibility.
It begins when you deal with the things that you've been avoiding or
would rather not deal with.
It is about facing your fears, fear of failure, fear of standing out,
fear of rejection.
Its about each of us taking the initiative to leap over the barriers;
to tunnel under, drive over or through the other barrier.
And not be satisfied with that one day's success but getting after it
the next day and the next.
The harder you work the more you will achieve and the safer,
and more secure life gets.
It's all about pushing the envelope and giving it all you can while at work.
It's about that 212 degrees of effort I keep talking about.

Its about helping build a recession-proof future for yourselves.
Its about doing what matters today - for you, for your loved ones,
for your companies.
So tomorrow when you get back to work, or the office let's begin with a new attitude.

Let's get in there and work hard, really sweat.

As ole General Schwarzkopf once told us, "No one ever drowned in their

You are worth a better life, a better future.

Are you willing to give it all you can?

Your success will be worth the investment.

Have a nice Labor Day!