May I borrow your broom? 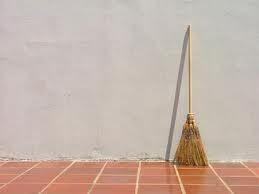 I was sitting at our community center one afternoon,

just having finished feeding about 60 of our village's elementary,

and middle school age children.
This one of DIF's (government) subsidized program that still runs to this day.
I was speaking to the wife of the village's baron - I'll call her Jesusita.
She was a tall beauty, older but very distinguished elegant woman.
She had driven bye (yes, we have a few trucks in our village - but come to think
about it, she is the only woman I have ever seen drive around town),

and because she was feeling a bit blue
she decided to drop in to speak to me.
She felt that her whole life was empty, that it had little meaning.
I listened to her for about twenty minutes and as she was getting up to leave,
in came Doña Joaquina.
Dressed in her typical mourning attire of a black dress, black hosiery,
and old dusty black shoes she walked in and with a big smile said,
"Buenos Días cariños!" (Good day my dears!)
I asked her to come over, Doña Joaquina worked 20 hours a week in our center,
mainly cleaning up after the morning breakfast rush.
I asked her if she would like to share with us how she had found happiness.
She blushed and said, I'd love to tell you but it may bore you."
So Doña Joaquina pulled up a chair along side Jesusita and I.
She started off, "Two years ago in the late July my husband died suddenly of a heart attack.
He had been working in our garden, bringing water to our small one acre piece of land.
Just one month later my only son Aldelberto accidentally drove off
"El espinazo del Diablo."
They say his brakes failed and maybe it was also his driving.
He always drove his truck as fast as it could go, so fast that even as crazy

as I am I just would refuse to drive with him," she chuckled.
A tear suddenly appeared in her left eye, "I had nobody...

I had lost everything,
I had nothing left.

I couldn't eat nor sleep, it was even hard for me
to go to church.
I never smiled at anyone, and I even thought of taking my own life.
But then early last December a little black and white kitten followed me home
from Javi's store.
I don't know exactly where he started following me, but I remember looking
down and seeing him, it was actually a her, but then I didn't know then.
I tried to shoo it away.
It would stop when I stopped, but then just as soon as I started walking

it too would begin following.
Well it followed me all the way home.
Somehow I felt sorry for the little creature.
It was already beginning to get cold outside, so I decided to let the kitten in,
but just for the one night (I told myself).
I got a little bit of milk out for it and told him, tomorrow Senor Gato

we will go find your real house.
It must have been hungry because it licked the plate clean.
Then it began to purr and then came over and rubbed against my leg,
and for the first time in months, I laughed.

It's little face was covered with milk and it kept licking itself clean.

I picked it up and I think it smiled back.
Then I stopped to think, If helping a little kitten could make me smile,
maybe doing something for people could make me happy.
So the next day I made extra flour tortillas and took them to a neighbor

Don Agustin who was sick in bed.
I made a promise that every day I would try to do something nice for someone.
It made me so happy to see them happy.
That is how I found this job.
I spoke to Tomas about volunteering.
He was able to make a position for me here.
I actually get paid for making a lot of children and a few adults happy.
Today, Jesusita, I don't know of anybody in the entire village

who sleeps or eats better than I do.
I've found happiness, by giving it to others."
Before Doña Joaquina had finished, Jesusita was sobbing loudly.
Jesusita had everything that money could buy, but she had lost the things
which money can't buy.
Jesustita got up and hugged Doña Joaquina for the longest time.
She wiped her tears and than said, "Please Dona Joaquina let me take that broom,"
and began helping Doña Joaquina.
I think we all know where we could be of help.
This holiday season, let's look for ways to put our skills,

and or our brooms to good use.
Live - Love - Grow.
Make it a great día!
Email Post