What are Enhanced Fujita 2 or 3's? 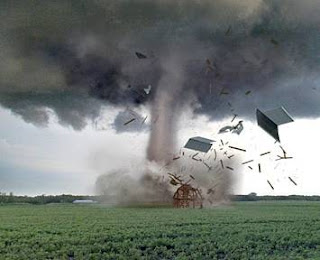 Feliz Domingo! I hope you didn't forget to set your clocks last night.

Today we begin day light savings, so I hopefully everyone remembered
to spring forward one hour.

some research on them.
Tornado conditions are caused when different temperatures,
and humidity meet to form thunderclouds.
Here in the US, warm, wet winds from the Gulf of Mexico tend to move
northward in the spring and summer, and meet up with colder,
dry Canadian winds that move southward.
At the place where these two powerful winds meet is called a dry line.
High, dry air coming from the north piles on top of low-moving,
moist Gulf air at a height of over 10,000 feet.
As the warm southern winds tries to rise, the cold northern air blocks them.
This clash causes the warm, trapped air to begin rotating horizontally
between the two large air masses.
At the same time, our sun is heating the earth below, and warming more air
that will continue to try and rise.
This warming keeps the continuous pressure building.
Finally, if the rising warm wind becomes strong enough to force itself up
through the colder air layer that is when a tornado is created.
I read where Henryville & Marysville, Indiana got hit by one EF-4 tornado
on that deadly Friday afternoon, back on March 2nd.
And that within minutes, another high end EF-2 to low end EF-3 tornado struck
essentially the same area.
You've heard the EF term and then a number directly after that term,

when meterologists talk about tornadoes.
The EF stands for Enhanced Fujita, and the number basically measures
the tornado's intensity.
An EF2 will travel between 111-135MPH and cause considerable damage,
like ripping roofs off well-constructed houses, shift foundations of framed
homes, completely destroy mobile homes and is capable of uprooting
all the large trees in its path, they have the power to lift cars off the ground,
and use debris as light-object missiles.
An EF3 is more powerful and will come at you at between 136 - 165MPH.
It will cause severe damage where ever it touches down.
It will destroy entire stories of well-constructed houses,
cause severe damage to large buildings such as shopping malls,
churches, larger schools and event centers.
It also has the power to turn entire trains over, lift cars and trucks up,
and throw them for a considerable distance.
According to one amazing story I read out of Harveyville, Kansas
a 53 year old grandfather was able to prevent his 8 year old grandson
from being sucked out of their living room's front window.
He was fortunate to catch the little boy in mid-air.

in the living room.

Yes fly about the living room.
The grandparents had been in their living room watching television
when around 9 p.m. CST, the EF-2 tornado touched down near their home.
The grandmother said that her grandson had just started walking up the stairs
when all the windows suddenly shattered and the little boy

with his dog on his lap.
He was holding on to the dog but then lost a hold of him and as he looked up
and seeing his grandson flying towards him, was able to grab him

saving him from being sucked out into the storm.
They said the only injury to the grandson was a large bump to his head,

when he hit his head on a coffee table as he was flying about the living room.
They found their family dog which had been sucked out through the window

uninjured an hour later.
The couple had built their home together more then 45 years ago,

and that it had been damaged but salvable.
A new two-car garage they had recently added was completely destroyed.
Folks, as we all know it has been one of the warmest winters on record.
Undoubtedly we will be reading more of these horrifying tornado stories.
They National Weather Service expects more severe storms and weather this year.
People need to prepare and take cover as soon as they are warned to do so.
I know too often we tend to think it will pass quickly, and or it won't be that bad
or worse we ignore the warnings.

Please heed the warnings.
We can all do our part to help ease the burdens of all the people faced with

having to rebuild their lives.

Please donate to the ARC,  as they are one of the main forms of emergency

relief for the victims of any weather related devastation.
The tornados, 45 of them, struck 11 states and sadly ended the lives of 60 people,

killing hundreds of horses and pets, and destroyed thousands of homes.

I love horses and a story on Rhonda and Bill McCardle, of Crittenden, Kentucky,

lost all their horses, fifteen total and had not been able to locate their four dogs.

They also lost two of their employees who had lived on site.

The couple said that the two people were more than family,