A difficult Bicentenial to celebrate... 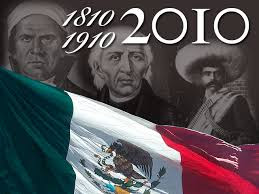 They planted the seeds of liberty and promoted the ideals of independence. They sought freedom for all, social justice, civil rights and individual guarantees that they wrote into the Mexican Constitution.

200 years later Mexico finds itself suffering the worst violence in its history and where many have forgotten that their rights were paid for with the blood and sacrifice of those passionate insurgents.
Liberators who managed to motivate an entire nation to take up arms and help free Mexico from the conquerors.
In 1810 the nation was willing to die, and many did die, for the just cause of peace and independence.

After independence came many years of great struggle to forge a new nation.

An indigenous priest became President - his name was Benito Juarez, who inherited a bankrupt country, one sought with wide spread disorganization, weak justice and laws and rudderless society.
It was a nation that seemed lost and off its course. Juarez and those who shared his vision eagerly sought to anchor the roots of the country, to start building the foundations of a dream that would translate into a great nation.
They knew the road ahead was long, the end of the journey beyond their lifetime.
In retrospect I can say that Mexico has been hardened almost all of our time as a nation.
Sadly many Mexicans have been killed, abused, insulted, violated and exploited by personages who placed personal interests ahead of the interests of the nation.

I too embrace the idea of fighting in the trenches to leave our children a real and tangible peace, and I pray that the Mexicans who love their country will also accept the challenge.

I know that they will one day realize the goals of social welfare and peace and attract investment in Mexican territory once again.
Today there is little to celebrate in Mexico, with all its on going violence, corruption and inequity.
As Mexico limps into the bicentennial of its 1810 independence uprising, it is battered and full of self-questioning, but with more openness and debate than perhaps at any other time in its history.

The bicentennial marks the 1810 uprising led by Catholic priest Miguel Hidalgo, who gathered a band of Indians and farmers under the banner of the dark-skinned Virgin of Guadalupe.
He was caught and executed soon afterward, but by 1821 the movement he started ousted the Spanish, a feat Mexicans celebrate on Sept. 16th.

A bicentennial should inspire and generate hope, and because this one comes at a time of deep crisis it hasn't inspired like we would have loved.
Perhaps what Mexicans have to celebrate today is their own endurance - the real glue that's held the country together for centuries.

That's especially true in Ciudad Juarez, where drug violence has killed more than 4,000 people since 2009, making it one of the deadliest cities in the world.
The violence is so bad that the city canceled its own Independence Day celebration for the first time since 1910.
The dangerous, violent, tragic, dangerous, corrupt and cynical Mexico is not the country most Mexicans belong to.
The millions who go to work everyday, despite street protests that often block traffic, who work to get ahead and support their families ... this invisible Mexico is the real Mexico.

Today, Mexico has strong civic movements on issues like crime, human rights and environmental protection that didn't exist even 25 years ago.
And despite suffering the most severe recession since the 1930s in 2009, the country has sound government finances and growing accountability.
Yet a few rich still hold the reigns of the country's highly-concentrated economy, where one or two firms dominate key sectors like television, telephones, cement, and food distribution.
Half of the country's 107 million people live in poverty.
Mexico is home to both the world's richest man, Carlos Slim, whose fortune is estimated at about $53.5 billion, and about 20 million Mexicans who live on less than $3 per day.

Mexico must work to close this gap that separates these two Mexicos!
This year also marks the centennial of the 1910-1917 revolution, when the old heroes like Emiliano Zapata and Villa overthrew the dictatorship of Porfiro Diaz on behalf of small, impoverished farmers.

The 2000 presidential elections which was won by President Felipe Calderon's conservative PAN or National Action party, marked the first peaceful transition of power in the country's history.
Today being a Mexican is about working hard, getting ahead by one's own efforts.
It's looking for some way to get ahead, even when there seems there is no way and just hoping to find it.

Today people are asking themselves if they are going to have to wait another hundred years to have our big celebration, to commemorate their independence and their liberty?

Here's hoping the next 200 bring the changes each Mexican so richly deserves.