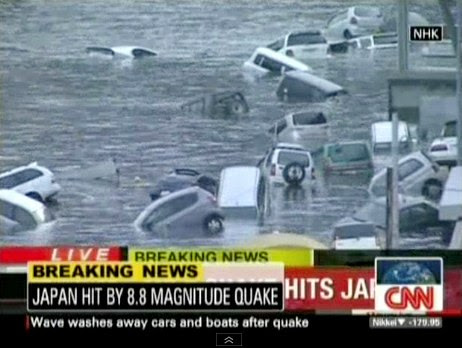 The nightmare began at 2:45 pm Japan local time. The powerful earthquake that unleashed a devastating tsunami Friday according to experts from USGC, United States Geological Survey, it appeared that the tsunami moved the main island of Japan by 8 feet (2.4 meters) and also shifted our planet on its axis by nearly 4 inches.
In Miyagi the north-eastern coastal town entire neighbourhoods were left with only rubble and ash and hundreds of homes and farms inubdated by the massive amounts of water that hit them in the form of a 30 foot high wall tsunami.
The expert I was listening to last night stated that the water actually reached a speed of up to 500 miles per hour at the ocean surface. Its forward ripple effect slows it down as it reaches shore but the density and impact the water produces crushes everything and anything in its sight.
The number of confirmed dead had climbed to 1000. Still many remain unaccounted and are considered missing.
The government warns of after shocks and further tsunamis, The residents near the damaged Fukushima nuclear energy facility were asked to immediately abandon their homes and take shelter due to the potential for radioactive leaks.
Schools and sport facilities were quickly turned into emergency centers. But with no electricity 6 million were left to sit in freezing cold darkness. Currently there there is snow falling in some parts of Japan.
The entire nation has been heavily damaged - Japan Relief units were working to provide drinkable water, food and medicine. Nature and this earthquake reminded residents of the third-largest global economy of their vulnerability.
Its effects devastating with most grocery stores closed, no electricity, no telephone service, no trains…  Yet, the danger continues to mount with plenty of other hazards such as gas pipes, gas stations, chemical storage and manufacturing facilities and the damaged nuclear plant.
Although Japan has an earthquake and tsunami measuring and warning system there is no reliable way even today to accurately predict and therefore warn the populations of an impending earthquake.
The quake was the most powerful to hit the island nation in recorded history and the tsunami it unleashed traveled across the Pacific Ocean, triggering tsunami warnings and alerts for 50 countries and territories some as far away as the western coasts of Canada, the U.S. and Chile.
The quake triggered over160 aftershocks in just the first 24 hours, 141 of those after shocks measuring 5.0-magnitude or more. It is said that this earthquake was hundreds of times stronger than the one that hit Haiti.
This morning I hope you will join me in prayers for the people of Japan. Natural borne calamities remind us that we are all part of one world. Where everybody is truly a part of our earthly family.
I pray that by His grace -
May their hearts be healed.
Shielding them with the balm of Loving kindness.
May He steady their step to be able to enjoy life again.
And renew their Faith so they can trust again.
Forever give them reason, again, to live and love.
私はあなたとあなたの家族のために祈っています
Email Post