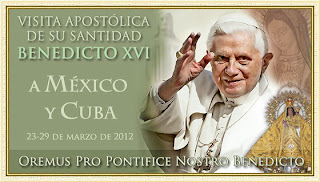 T
he Pope continues his visit to Mexico and is now visiting Silao Guanajuato, Mexico.
He brought the message of Hope to a ravaged country.
His message these past couple of days has also been one of Peace.
Mexico needs all the prayers and goodwill that can be mustered.
I don't understand the violence.
But I don't propose to have the solution either.
I have written to many politicians and even the President of Mexico,
Felipe Calderon Hinojosa.
In them l have begged and pleaded for more military intervention, for justice,
and for that Peace that has continued to elude the country since Dec. 11, 2006.
The day President Calderon ordered 6,500 Mexicans troops to Michoacán
under operation Michoacán to take the fight to the cartels.
In the end, the final distinction of one's bad or good soul is that which prompt us to do
good found only in living "grace with humanity."
There have been over 50,000 deaths attributed to this drug war.
With various cartels weighing their devastation on each other and anyone in between.
A profit based drug war worth an estimated illegal gain of between 15 and 50
Billion dollars per year.
Pope Benedict XVI spoke again this afternoon to the faithful of Mexico.
His message much like the one he has shared these past couple of days
asks for renewed faith, for the strength from a pure heart to help stand up
to one of the most distressing times of human suffering for Mexico.
A nation that cotinues to be stalked by drug violence, crime and uncertainty.
Pope Benedict also repeatedly invoked my Viejita's favorite saint,
the Virgin of Guadalupe, patron saint of Mexico and Latin America.
This message and hs visit I hope brings some comfort and begins a process
of redemptive healing.
With so many families being forced to leave their homes and cities in search
of a more tanquil life, some have even emigrated to the US.
When so many people are suffering due to poverty, or the corruption,
drug trafficking, and increased crime, his presence and message
to the country rings bold.
It is time to make peace, strengthen the family and share ones hope.
We must all have Faith and work to overcome the violence at every level.
More than 50,000 people have been killed in Mexico, (personally three
of my own loved ones) since President Felipe Calderon launched
a military-led offensive against powerful drug cartels nearly 5 1/2 years ago.
Sure many of the dead are traffickers and sicarios and gunmen,
but an increasing number have been innocent men and women,
and among them young children.
It will take more than words and a message of Peace or of Hope.
The Faith that is instilled in each of us must also put actions behind them.
The need for more emphasis on the youth and their education and sustainable
employment opportunities are paramount.
Gracías querido Papa.