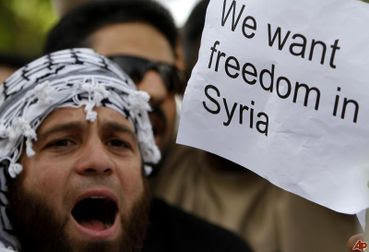 Where peace and freedom thrive.

But will peace ever come to brothers across the seas?
The Syrian uprising is a part of the wider Arab Spring,

which brought a wave of upheavel throughout the Arab World.
What started as public demonstrations developed into a nationwide uprising.
Protesters continue to demand the resignation of President Bashar al-Assad.
They are desperately trying to over throw his government, and end a nearly five
decade rule of their Ba’ath Party.
Recently a UN delegation led by Kofi Annan was seeking
a diplomatic resolution.
March 15th marked their first anniversary of the uprising.
So far not much has helped bring peace to Syria.
In the end, what may force him from power,
will not be diplomacy, but sanctions.
My military background with experience in the Middle East tells
me that the kind of intervention needed in Syria to get
Bashar al-Assad to step aside is not force.
If we look at what worked in Libya as the model and we know very clear
this situation is no where close to the one in Libya.
We have to get Russia and China on board.
Whatever shape the intervention takes it is going to have to be
a humanitarian one in nature.
It can't be an invasion.
No air invasions, and certainly no missile strikes.
It's going to be confronting it with a buffer zone from Turkey,
along the Turkish border with Syria and a humanitarian corridor.
Relief agencies are trying to come through Turkey into Syria
with limited success.
The people of Syria, especially in Homs and most recently Edleb
need our help now.
For the remainder of the year we must all focus on Peace.
Meditation and prayer must focus on the Syrian people.
Today we can all begin by bringing peace into our own lives.
From our own lives we can allow our inner peace to flow out.
We must join the spiritual chain and pray for a Syrian transformation.

Let our meditations focus on allowing HIS divine light and love to flow
through the minds and hearts across humanity.

As you begin or end your day, send your transformative light and love act,
and collaboratively we will produce
the Highest Good for all.


Using our prayers for ourselves and on behalf of the innocent victims
of this Syrian crisis.
Make it a prayer filled día!
Email Post