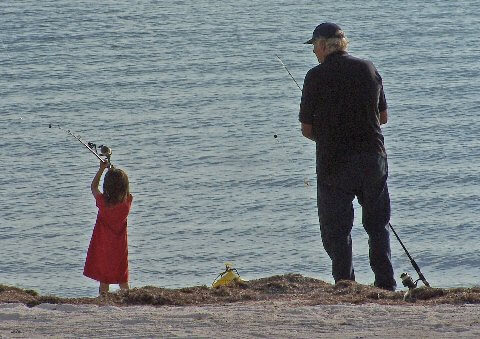 As some of you already know we will soon be having
our first granddaughter!
Has anyone ever been a Grandfather before?
I could certainly use your wisdom, advise and suggestions.
We are anxiously awaiting the arrival of a precious little girl

to be named Bryn Addison as in (Breen not Brian ;).
I remember as a child how I would always turn to my Grandfather Aristeo
for advise, to vent and even to teach me how to do a quicker job

of saddling my horse "Relampago," so I could "best" my brothers.
I loved my Grandfather, my Grandmother Amelia too.
My Grandfather would often be the one to explain things in a manner

that I knew exactly what the others were saying.
One year we were experiencing a lunar eclipse.
Everyone in the village was upset, a lot of the indigenous

had everyone all up in arms.

Our village and theirs have always had very close ties.

Their Indian Chief at one point almost married my Viejita.

for an uncle Roberto, that was in the State department and went on to

serve Mexico as their Consulate General around the world.

But the Indian Chief was called, Pesoquia, he was a proud Kickapoo,

whose ancestors came originally from the great lake region before

settling in Anandarko, Oklahoma and then after their tribe had internal disputes

moved further south to Eagle Pass in Texas and eventually Tamichopa.
The Kickapoo were very superstious and they convinced everyone that the end

of the world, the final apocalypse was near.
Women were crying and on most of the men's faces you

could feel their sense of impotence and concern.
I was a young boy and was pretty upset at hearing

the rumblings, prayers and cries.

I was crying because I too was caught up the moment and hysteria.
He pulled me over to him and than as he hugged me asked

me to sit down on his favorite old wooden bench.
He said, "Mijito, the world will not end tonight.

It won't end tomorrow night.
When God is ready to take you to heaven, your world

as you now see it will end.
Until then don't worry about what people are saying or doing

( a lot of people were busy putting crosses on their front

doorsteps, and making huge cross like symbols with rock salt

in front of their homes).
I don't think that they are making God very happy with all this commotion."
With that he hugged me again and patted me on the head,
and said, "Now let's go look at this unusual moon up in the sky.
Let's watch and see what kind of show God is going to put on."
So yes, that was just one memory of my Abuelito Aristeo.
So now as we anxiously await the arrival of a little girl,

Bryn Addison I am praying that I can live many years

so that I can also be that gentle voice of reason, of comfort,

and a loving embrace, to be able to see her through all her

times of challenges, trials and difficulties.
I was reading that 95% of all people over the age of 65 who

have grown children are now Grandparents.
That the average age we are now becoming grandparents

is much younger, closer to 45 years of age.
But simply put, I just want to be the best Grandfather ever!
This little one is inspiring me to take better care of myself,
so that I can hope to spend the best latter years of my life
in this very important role.
I read another article that found that grandchildren who had
closer relationships with a grandfather were likely to perform

better in school, be more positive, and emotionally adjusted,
have higher self-esteem, and a greater ability
to develop and maintain friendships.
Who wouldn't want that for their grandchildren?
I can't wait to be a great Abuelito, and show her

the unconditional love that all of our grandchildren

deserve.
I can't wait to see her, hold her and maybe even display
photographs of her.
(If you know me, you'll better understand my spiritual

aversion to photographs).
I can't wait to teach Bryn Addison to draw, fish, horseback ride,
play a musical instrument, sing.
Here's praying for an easy and uneventful delivery.
Bryn Addison, we're all praying for you.
Your Mom and Dad and the rest of us are all anxiously